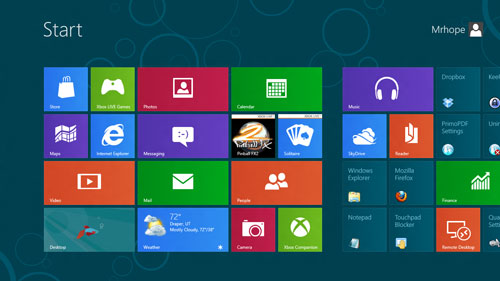 Windows 8 introduces a new form of start menu called Start screen, which resembles the home screen of Windows Phone, and is shown in place of the desktop on startup. The Start screen serves as the primary method of launching applications and consists of a grid of app tiles which can be arranged into columnar groups; groups can be arranged with or without group names. App tiles can either be small (taking up 1 square) or large (taking up 2 squares) in size and can also display dynamic content provided by their corresponding apps, such as notifications and slide shows. Users can arrange individual app tiles or entire groups. An additional section of the Start screen called “All Apps” can be accessed via a right click from the mouse or an upward swipe and will display all installed apps categorized by their names. A semantic zoom feature is available for both the Start screen and “All Apps” view which enables users to target a specific area or group on the screen. The Start screen can uninstall apps directly.

Windows 8.1 makes the following changes to the Start screen:

Windows 8 introduces a redesigned lock screen interface based on the Metro design language. The lock screen displays a customizable background image, the current date and time, notifications from apps, and detailed app status or updates. Two new login methods optimized for touch screens are also available, including a four-digit PIN, or a “picture password,” which users allow the use of certain gestures performed on a selected picture to log in. These gestures will take into account the shape, the start and end points, as well as the direction. However, the shapes and gestures are limited to tapping and tracing a line or circle. Microsoft found that limiting the gestures increased the speed of sign-ins by three times compared to allowing freeform methods. Wrong gestures will always deny a login, and it will lock out the PC after five unsuccessful attempts, until a text password is provided.

Windows 8 introduces new forms of notifications for Metro-style apps and for certain events in File Explorer.

Windows 8.1 introduces a Quiet Hours feature, also available on Windows Phone, that allows users to suppress notifications based on the time of day (e.g., notifications can be disabled from 12:00 AM to 6:00 PM).

Windows 8 includes improved support for multi-monitor configurations; the taskbar can now optionally be shown on multiple displays, and each display can also show its own dedicated taskbar. In addition, options are available which can prevent taskbar buttons from appearing on certain monitors. Wallpapers can also be spanned across multiple displays, or each display can have its own separate wallpaper.

Windows 8.1 includes improved support for high-resolution monitors. A desktop scaling feature now helps resize the items on the desktop to solve the visibility problems on screens with a very high native resolution. Windows 8.1 also introduces per-display DPI scaling, and provides an option to scale to 200%.

Windows Explorer, which has been renamed as File Explorer, now incorporates a ribbon toolbar, designed to bring forward the most commonly used commands for easy access. The “Up” button (which advances the user back a level in the folder hierarchy) that was removed from Explorer after Windows XP has also been restored. Additionally, File Explorer features a redesigned preview pane that takes advantage of widescreen layouts. File Explorer also provides a built-in function for mounting ISO, IMG, and VHD files as virtual drives. For easier management of files and folders, Windows 8 introduces the ability to move selected files or folders via drag and drop from a parent folder into a subfolder listed within the breadcrumb hierarchy of the address bar in File Explorer.

Windows 8 ships with Internet Explorer 10, which can run as either a desktop program (where it operates similarly to Internet Explorer 9), or as an app with a new full-screen interface optimized for use on touchscreens. Internet Explorer 10 also contains an integrated version of Flash Player, which will be available in full on the desktop, and in a limited form within the “Metro” app.

Windows 8.1 ships with Internet Explorer 11 which includes tab syncing, WebGL and SPDY support, along with expanded developer tools. The Metro version also adds access to favorites and split-screen snapping of multiple tabs; an additional option to always display the address bar and tabs is also available.[89] The Metro version can also detect and highlight phone numbers on a web page and turn them into clickable links that, when clicked, initiate a call with a compatible app such as Skype.

Windows 8 includes an overhauled version of Task Manager, which features the following changes: